Although the high wheel bicycle was ridden primarily by young, middle class men, women too had their own design of the bicycle. In 1874, Starley produced an “Ariel” specifically for ladies. The social nicety of the time required ladies to wear tight corsets and long dresses and this model had a side-saddle and the pedals drove cranks through levers which were pivoted in front of, and slightly above, the front wheel axle. Connecting rods communicated the pedal motion to the overhang crank shaft. Because of the side saddle position, the handlebars were shortened on one side and lengthened on the other. The rear wheel was mounted  on an overhung axle instead of the usual arrangement of a spindle carried within a fork. The track of the front wheel was offset from that of the rear wheel to counteract the bias from the side saddle position. The construction was found quite impractical (acually impossible) and instead the tricycle, despite costing three times as much as already expensive bicyles,  became popular with ladies. 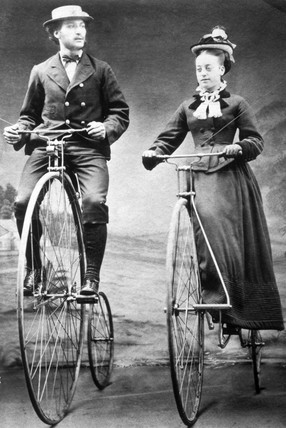